Endorphins and the Secret of Runner’s High 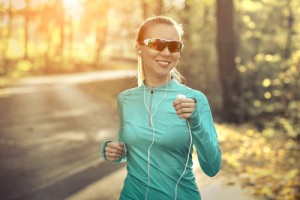 Sedentary people often have a hard time understanding how intense physical activity can make them feel good. They see runners and other physically active people wincing, gasping for air, and walking slowly and painfully after an exercise session. They cannot answer the question, however, of why those physically active people return time and again to activities that look painful and uncomfortable to the sedentary observer. The answer is that intense physical activity can bring about a euphoric sensation known as “the runner’s high”.

For many years, researchers have connected the runner’s high to increased endorphin levels that they saw in the bloodstreams of individuals who participated in high-intensity activities. Endorphins are natural painkillers that are released when a body experiences stress or pain. They are also released to reinforce enjoyable events, such as a good meal or sexual activity. Endorphins share certain chemical structures with morphine, and in some ways they create a similar effect. Yet recent research has revealed that endorphins in themselves are not entirely responsible for the runner’s high.

Endorphin molecules are large and complex, and as such they do not pass easily between the blood-brain barrier. Individuals who do exercise have been found to have increased levels of another neurotransmitter, anandamide, in their brains, and that anandamide seems to lead to higher endorphin levels in their bloodstreams. Anandamide is a form of a cannabinoid that has a similar structure to the effective compound in marijuana. This does not suggest that exercising creates the same kind of high that can result from smoking a marijuana cigarette, but a body’s natural chemical reaction to exercise and the pleasurable sensations realized as a result of that exercise is such that the same pleasure centers and receptors are involved.

The Secret of the Runner’s High

The secret behind a runner’s high may very well involve a number of different factors. In addition to causing the release of endorphins, anandamides, and other feel-good neurotransmitters, exercising floods a person’s body with energy-inducing norepinephrine. Regular exercise helps a person to lose weight and to look and feel better, leading to improved energy levels and higher self-esteem. Individuals who exercise regularly can (at least in the eyes of sedentary individuals) have insufferable levels of energy and is coupled with bragging about various athletic feats. A distance runner can gasp through a race and walk gingerly for several hours or days after a race, but even before the pain subsides he is planning his next run to chase after the runner’s high. Science might not fully understand it, but regular runners vouch for the reality of what they experience.

People who are dealing with depression or anxiety, or who are trying to break a drug addiction or alcoholism habit, might find that running or other vigorous exercise are the perfect tool to aid in their struggles. Because vigorous physical exercise can put a sudden strain on a sedentary person’s heart, he or she should not jump into a running program or other exercise regime without first consulting with a physician. Weeks or months can elapse before the first inkling of a runner’s high makes its appearance, but once it does appear, a person can get hooked on an active and healthy lifestyle.

For suggestions and more information on starting a running or exercise program,, please call Sustain Recovery Services at (949) 407-9052. Our staff can direct you to pursue the best path to start your own quest for the runner’s high.